Fumbling between the different tools you use to find information is painful enough when you’re in the office. But on site, opening and switching between two or three mobile apps on your phone or tablet?

Launched earlier this year, the Kaseya Fusion app is the future of IT on mobile, as the only app in the channel to combine RMM and PSA functionality. Today, it gets better. We’re adding IT Glue functionality to the Fusion app, taking the next leap in streamlining IT technician workflows for maximum efficiency.

The core principle for IT Glue since day one was to increase the efficiency of IT teams by giving them the information they need, when and where they need it. We applied that same core principle when adding IT Glue to the Fusion app.

The first release of Fusion with IT Glue features a version of the Organization Dashboard that is focused on what on site techs need when they first walk in the door of a client site. You get location information, key contacts, and the wifi password so you can open your laptop and get to work right away. You’ll also be able to click into the rest of the passwords stored in IT Glue quickly and easily. You’ll also be able to see the open tickets and projects for the company, imported from BMS. That way, if your onsite tech arrives to service one ticket, they can address the other issues at the same time. It sounds like a small thing, but it makes a big difference on customer satisfaction, and allows your onsite techs to reduce travel times by cutting out return trips. The location functionality also allows the tech to see what other clients are close by, improving routing efficiency. 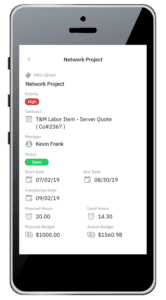 The beauty of Fusion is that it’s engineered specifically to streamline technician workflows, a core trait of the IT Glue mindset.

“When we mapped out what we wanted Fusion to be, we knew it should be so much more than just putting some PSA and RMM stuff into a mobile app. Anybody can do that. We wanted Fusion to be an expression of IT Glue’s vision of improving MSP efficiency, reducing time waste and eliminating the space between, all that time spent toggling between applications. It’s a logical extension of our core principle and our partnership with Kaseya,” explains IT Glue’s General Manager, Nadir Merchant.

“When a technician arrives at the client site and opens Fusion, they get the information they need the most, right up front. It’s a seismic shift to have a mobile app that brings together an entire platform of PSA, RMM and IT documentation.”

Merchant and the IT Glue Product team see today’s announcement as just the beginning. The roadmap for Fusion promises the same deep workflow integrations users of IT Complete enjoy, available from anywhere on the mobile device of their choice.

If you’re not already using IT Glue, we invite you to sign up for a demo. If you’re using BMS, VSA and ITG already (or even just two of those three) then head on over the App Store or Google Play on your mobile device to download the Kaseya Fusion app.